So last night as I'm lying in bed...trying to get to sleep...not sleeping...as has been now perfectly normal for me ever since having children...this 'sleep is a treat' sort of business...

No brainer there. That's also been perfectly normal for me.  Really has been ever since- well- ever since I was born.  Ever since I could hold a cohesive string of thoughts together in my brain.

But what I liked about last night's struggle to sleep slash assessment of my life thus far (really just "Wednesday") was that I came up with an image in my head.  An image of a ridiculously windy path through a cragglety dense thick wood. ----The computer does not like the word "cragglety."  It has now underlined it twice in red.  Dear writer, you are misspelling whatever it is you think you want to say.  Ha!  I say to the computer. I have spelled exactly what it is I wanted.  You can keep your damn underlines.  I heart my onomatopoeias.  (Had to look that up to spell correctly.) --- A craggelty path that sometimes redoubles back on itself- a path that seems to lead somewhere, and yet only rarely provides the diligent follower with clues as to where it's leading, or why it's leading one there.  In this circuitous manner.  A great snarly little image in my head.  Probably not so dissimilar to, say, my small intestines.

So this morning I'm Googling to find such an image to echo this particular midnight firing in the brain.  (Where's that perfect image of a windy path slash my lower intestinal track?)  And I found some pretty great stuff that I'd like to share.  First of all- there's this: 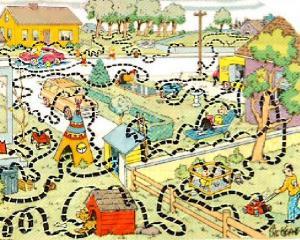 Which apparently comes from the "Family Circus" comic strip.   I don't see that exactly because where are any of the characters from the "Family Circus?" but- ok- this is sorta what I was getting at.  This path my life has taken thus far as an artist and a mom and a manic depressive and an intense person. At times soft and cuddly but brutally opinionated.  OK. Circuitous path through cartoon neighborhood backyards. This is a start.

But I thought- really what I'm after here is more of a MAP.  A. because I love maps.  I love looking at them.  They comfort me and make me feel more present.  Plus,  they're filled with tons o cool information and pretty colors. And B. what seems to drive me to distraction, what makes me so damn obsessive about my lower intestinal life path is that it doesn't appear to follow ANY sort of map.  Like, one city just doesn't lead to another one.

One day I'm playing some crazed babysitter in a sketch comedy routine in a grimy black box theater on Hollywood Blvd and a few years later I'm standing in line waiting to get my Vegas showgirl costume as an extra in "Mr Saturday Night"  and Billy Crystal comes up to shake my hand, clearly thinking I'm someone else....fast forward two years to me working as a catering waiter at the souped up Holiday Inn in North Hollywood serving the "Little People of America" their many many drinks at the Christmas party.  Bending over to access the bar, I get hit on by a superlatively drunk little person with a shiny rainbow vest and a black ponytail. ... Then let's go back 10 years or more when I'm the chosen student player at my piano teacher's wedding.  She's marrying some rich Catholic doctor, so I'm playing a Bach etude in the middle of her enormous wedding party on the grand piano in the center of some insanely decorous cathedral which is probably as old as Chicago itself.  Feeling like a star at 13. And then let's go forward about 20 years when I'm promoting my third album, trolling around the south by myself on a little 12 day tour- hitting up Eddie's Attic in Atlanta- (one of the most exclusive listening rooms in the whole of the southern states) and I've somehow managed to get over 55 people in this tiny joint listening to my music when suddenly in the middle of my third song the piano lets out an enormous electrical scream, shocks my fingers, and promptly dies.

These are only really a tiny handful of the rich dirt of ridiculousness that comprises one Holly Long's artistic career path.  (I should write a book. Blah blah.) 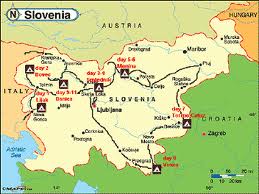 A pretty great circuitous route- right?  It's starting to really line up with my thinking here. Well, especially if I consider my artistic career path to be Slovenia.  Which up until this particular moment, I have not. And then, because the universe is always cracking jokes, and I frequently seem to be the butt of them, of course I ran across this: 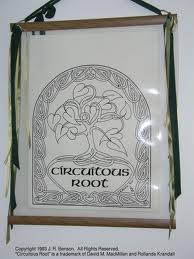 Which I believe most of my father's side of the family would greatly approve of.  Being insufferable punsters much of the time.  But there's also something cool and sorta evocative about the 'root' as opposed to the 'route.'  The 'root' after all is concealed under ground.  An idea I sorta fell upon last night yammering to my exhausted husband, wide awake as a cokehead, spewing internal thoughts left and right. Meanwhile he's desperately trying to figure out what the appropriate number of "ohs" and "um hmms" are he can inject into my rant that will allow me to shut up and let him go to sleep...

...I did trip upon this notion of myself as mole under the ground.  Furry little blind mole, making her way through the underground tunnels of life- wondering which way to go next. Trying to get to the big digout in the sky...  so circuitous root is sort of interesting.

But I must share with you my favorite photo.  You know how you type something random into Google because you have a very specific weird question you want answered...And you know it's only a matter of you coming up with the right goofy word sequence to plug into Google's eager, open-wide search bubble before you land upon what it is you were searching for? This morning was no exception for me.  I plug in "circuitous route"  and this pops up:

hang on- almost there 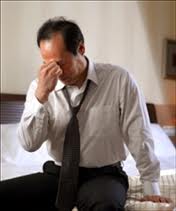 According to Google, Circuitous Route equals middle aged asian man with a sinus headache at the Motel 6. And I can think of nothing better than that.  There's my Wednesday night people- one photo says it all.  Me assessing the small intestines of my career path.

After all, Tuesday I spent taking new promo photos of me dancing wildly around pools of pigeon shit in an abandoned Culver City warehouse we had to break into to access.  Wednesday I was in the studio recording a punk rock tune I've recently penned called "Panic Attack," all the while riding the edges of another heart-shuddering anxiety attack the whole time. Tonight I'm getting on stage and reading some verbal spewings in a Word Salon helmed by my fabulous writing coach...

I'm all over the map. Of Slovenia.  That's how it always been and apparently- always will be.

I promise. Cross my heart.

Dancing In The Dark